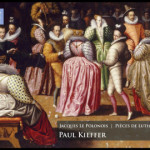 Lutenist Paul Kieffer, based in Basel, Switzerland, has recently recorded a fantastic album Jacques Le Polonois | Pièces de luth, released on December, 2015. He also made some great YouTube videos. You can subscribe to Kieffer’s YouTube channel and listen to samples or buy his album via Amazon: Jacques Le Polonois | Pièces de luth.  Jacques Le Polonois (c.1545/55-c.1605), who is also known as Jacob Reys, Jakub Polak, or Jacob Polonois, “was a royal lutenist to Kings Henri III and Henri IV of France, and a contemporary of the English lutenist and composer John Dowland. About 60 solo lute pieces by Jacob Reys have survived, and like the works of John Dowland, his music spans a couple of different phases and calls for various lutes ranging from six to nine courses (most of it being for seven- and eight-course lutes). On this disc, Kieffer plays an eight-course lute made by Grant Tomlinson of Vancouver, BC.”  You can see him playing this music and instrument in these two video samples below: