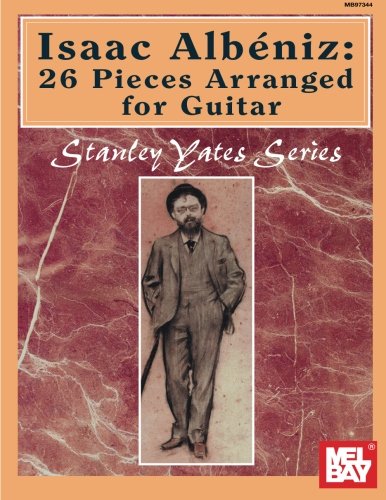 Stanley Yates has been publishing some great material as of late from technique books, Bach editions, to complete sonatas of Mateigka. So, I’ve come to trust him as an editor and player too. This book of work by Isaac Albéniz (1860-1909) arranged for guitar is an excellent addition to anyone’s library. Not only are good editions of Albeniz hard to come by but not many people have reimagined the classic arrangements of Llobet and past players from the 1960’s. So this edition is interesting because Yates has gone further than republishing old arrangements and taken a fresh new look at these works to create his own edition. Even if you don’t end up loving each one you’ll still want to use it for comparison and to consider taking on his expertise.

Buy or look inside the book via Amazon

Publisher’s Text: “This comprehensive edition brings together all of the standard pieces in the adopted Albeniz “guitar repertoire” along with additional pieces that complete many of the suites and other groupings as published during the composer’s lifetime. These solo arrangements were made while consulting the earliest editions of the piano originals, and are faithful to Albeniz tempo indications, dynamics, phrasing slurs, and other expression markings. The selections are: Pavana-Capriccio, Op. 12 (1992); Suite espanola, Op. 47 (1886); Recuerdos de viaje, Op. 92 (1888); Doce piezas espanolas, Op. 164 (1889); Espana, seis hojas de album, Op. 165 (1890); Serenata espanola (Cadiz, cancion), Op. 181 (1890); Mallorca, barcarola, Op. 202 (1890); Zambra granadina, danse orientale, WoO (1891); Cadiz-gaditana, WoO (1891); and Chants d’Espagne, Op. 232 (1891-1894). Carefully researched and meticulously fingered in the scholarly manner one would expect from Stanley Yates.”