Altius Duo (Adam Batstone & Chad Yacobucci) play Prelude and Fugue no. XV in A major by Mario Castelnuovo-Tedesco (1895 – 1968). Audio and Video Produced by Drew Henderson. Guitars by Bruno Boutin and Greg Byers. Tedesco was an Italian composer who lucky liked guitar and wrote a ton of works both solo and chamber music. In 1939 he migrated to the United States and became a film composer for MGM Studios for some 200 Hollywood movies for the next fifteen years. He also wrote concertos for such soloists as Jascha Heifetz and Gregor Piatigorsky. This particular duo comes from Les Guitares bien tempérées, Op. 199 (24 Preludes and Fugues in all 24 major and minor keys) which is amazing. It’s a huge collection and contribution to the repertoire by a fantastic composer. Writing 24 in all the keys is a tip of the hat to old J.S. Bach’s Well-Tempered Klavier. You can get the sheet music via Sheet Music Plus: Guitares bien tempérées 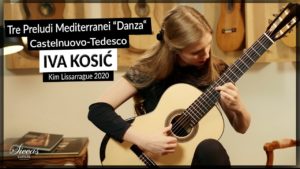 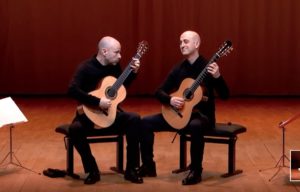 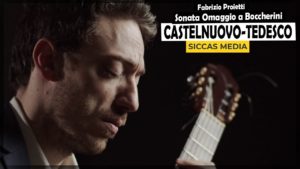