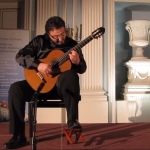 Very beautiful intro followed by some intense romantic flourish at around 2:45. Actually, as I was looking for info on the piece and I found another fantastic video by Tariq Harb where he talks about the piece:

First, it starts with an introduction, which to me can be voted as one the best musical bits in guitar writing history! Following the intro, the section ‘Le Depart’ commences evoking the French army departing to Sebastopol. This section is made up of several smaller segments, all having unique emotional character showcasing what the guitar can do both musically and technically, until midway through the piece, the third major section entitled ‘Le Retour’ begins. It simply means ‘the return’ of the French army from their siege of Sebastopol. A march-like character kicks off this section, going through a whirlwind of emotions till the end, finally closing off the piece with the parallel minor key of the Introduction/home key, the key of E minor.