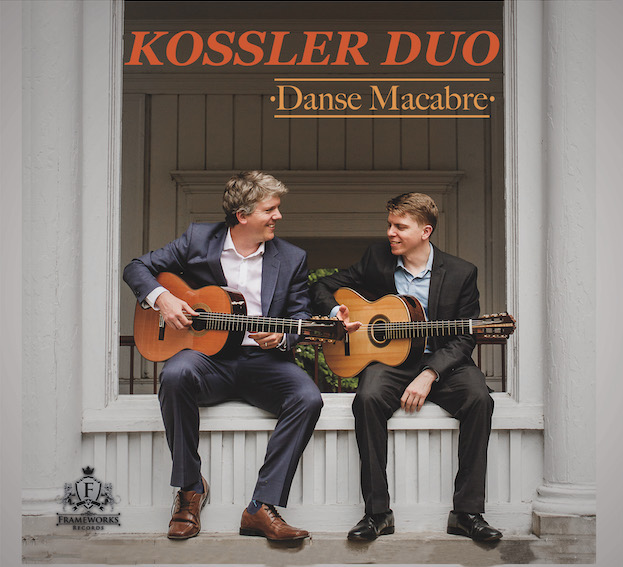 Buy or Listen to Danse Macabre on iTunes, Amazon, Spotify

Danse Macabre is a collection of new transcriptions of piano and orchestral works for two guitars arranged by the Kossler Duo. I’ve featured Adam Kossler’s videos a number of times so it was with great pleasure to receive this album with Adam and his brother John Kossler. It’s tricky business arranging orchestral and piano music even when there are two players but it can also result in some exciting solutions to the arranging process and performance.

When I see arrangements of great composers I often question whether I want to hear guitar reductions. However, this process can involve some creative reimagining of the works and the result here is charming. From the very first track it was clear that the duo has excellent ensemble skills and beautifully matched phrasing. These are virtuosic arrangements that are very active but I could still hear the motifs being passed back and forth with similar articulations, arched phrases, and dynamics. In the Haydn, I really appreciate their willingness to start with nice and simple arranging and then build and expand to get a sense of growth and increased orchestration. The recording sounds warm and clear and a bit on the live side which I prefer for its natural quality.

Danse Macabre by Kossler Duo is filled with charming and virtuosic performances of classical masterworks arranged for two guitars. The arrangements elegantly showcase the best timbral qualities of the classical guitar while bringing out the motivic complexity of the compositions all wrapped up in refined and musical performances.

Adam Kossler is a top prizewinner in a number of national and international guitar competitions including the Boston Guitarfest, Columbus Guitar Symposium, East Carolina Guitar Competition, MANC Guitar Competition, Texas International Guitar Competition, Music Teacher National Association Competition, and the Appalachian Guitarfest Competition. Kossler’s international performance career has taken him throughout the US, Canada and Central America. He has been a featured artist with numerous concert series including the John E. Marlow Guitar Series (Bethesda, MD), Isle Newell Concert Series (Appalachicola, FL), and the Seven Hills Guitar Series (Tallahassee, FL) among many others. In 2015, his Marlow Guitar Series performance was aired in it’s entirety on Classical WETA’s weekly program, “Front Row Washington”. In addition to his performance career, Adam is also in demand as a teacher and clinician. Recent engagements include The Denver Guitar Summit (Denver, CO), Festival Internacional Suzuki (Guatemala City, Guatemala), University of Alaska Guitar Festival (Anchorage, AK) Rantucci Guitar Festival (Buffalo, NY), and in 2015 Kossler was the featured Artist in Residence for Utah Classical Guitar (Salt Lake City, UT). In 2014, Adam released his first solo recording, Guitar Recital. The album was received with enthusiasm by critics and audiences and was featured Tom Cole’s show, “The G String” on WPFW 89.3 FM in Washington D.C. In 2015 Kossler released his second solo record. Ekloge, an album of 20thcentury music, includes works by Joaquin Rodrigo, Manuel Maria Ponce and Mario Castelnuovo-Tedesco, as well as his own new transcriptions of music by Jean Sibelius. Adam began his musical studies with his father William Kossler. He went on to earn his BM degree at East Carolina University with Dr. Elliot Frank, his MM degree at Appalachian State University as a teaching assistant to Dr. Douglas James, and completed a DMA in Guitar Performance at Florida State University where he served as a teaching assistant to Bruce Holzman.

John Kossler started his guitar studies through the Suzuki Method with his father, William Kossler, at the age of four years old. He eventually attended the North Carolina School of the Arts in Winston Salem, North Carolina, studying under Joseph Pecoraro. Placing in competitions such as the ECU Guitar Festival in Greenville, North Carolina, the Young Arts Festival in Miami, Florida, and the Music Academy in Greensboro, North Carolina, John then attended Wake Forest University, studying under Patricia Dixon. During his education at WFU, he performed in Europe in cities that include Milan, Italy and Postojna, Slovenia. He has also won the New York Artists International Competition for 2016. John has just finished his Masters of Musical Arts degree in guitar performance with Ben Verdery. Along with writing and arranging music, he currently teaches and performs throughout the country.

The Great Necks – Impressions of Spain