The Miscelanea Guitar Quartet via Aesthis Records have been putting out very high quality videos with some great playing. For this one they are playing Apophis by Marios Joannou Elia.

It’s nice to actually see the composer in the video. Far too often composers are left out of the production process but here he’s an integral part. The performance is very clean and clear despite the challenge of the varied textures and alternative playing techniques. The composition is filled with interesting imitation and weaving lines that culminate in group climaxes. Really interesting textures and contrasts. The quality is and production is spectacular, new music promoters can take a hint at how successfully they present this music.

I am delighted to have all my guitar quartet compositions premiered by the Miscelanea Guitar Quartet. Their brilliant interpretation of “Staubzucker” and “Apophis” has managed to enthuse audiences allover Europe and America, thus presenting contemporary music in a very successful and uncommon way. – Marios Joannou Elia

“Apophis” — a commission by the Otto Mauer Foundation, Vienna — was composed in Salzburg in 2001 (originally for clarinet quartet) and in 2008 (for guitar quartet). It is part of Marios Joannou Elia’s portrait CD “Staubzucker — Guitar Music in Ensemble Formations” (Aesthis Records). 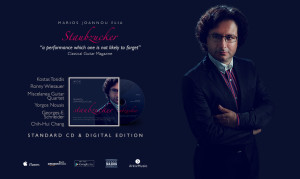