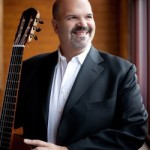 I love these songs. The guitarist gets cut off for a chunk of the video but he comes back.

Four of the seven songs from Dominic Argento’s “Letters from Composers” sung by tenor, Robert Swensen and guitarist, Nicholas Goluses at the Eastman School of Music September 14th, 2010. Letters from Composers (1968), which uses as its text letters written by Chopin, Puccini, and others. You’ll notice the musical quotes all over such as the popular Schubert lieder in the first song…

Goluses is a professor at Eastman and recorded with Naxos, Albany etc. Another good find via SoundBoard. Photo via esm.rochester.edu