François de Fossa is one of my favourite 19th century composers for guitar and one who composed music of significantly higher quality than many of his contemporaries. In fact, he was sometimes referred to as the “Haydn of the guitar”. This work, although smaller in scope than some of his other works, is equally harmonically rich and thematically interesting. Although well known for some time, his music is still somewhat underplayed. This may have to do with the fuller harmonies which he employs making some of the works a handful on guitar. For a full exposure to his solo works I recommend Runar Kjeldsberg’s recordings of the complete solo guitar works which gives you a fuller picture of his contribution to the guitar canon. Here is the YouTube link if you want to watch my performance and lesson there.

If you’re wondering why this work sounds familiar, the opening fragment is somewhat similar to Saint Anthony Variations Op.56 (also called, Variations on a Theme by Joseph Haydn) by Johannes Brahms (1833-1897). The theme of the Brahms work is not necessarily by Haydn so the attribution of the wind ensemble arrangement he heard is uncredited in research. The work has an orchestral version and four hand piano version. Due to the dates involved I’d say the similarity is purely coincidental and it’s really just though few opening notes.

Side note: Hehe, if you listen to the final two measures you can hear Penny (my new puppy) barking…had to keep the take because she was just warming up! 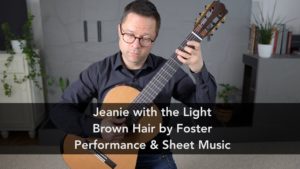 Jeanie with the Light Brown Hair by Foster 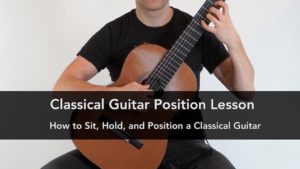