Raphaella Smits performs Elegie by Johann Kaspar Mertz (1806-1856) on a period instrument, Mirecourt 1827. From a recent concert in Drongen, Belgium. This comes via her sponsor Strings By Mail and their YouTube channel. Great playing by Smits and interesting to hear the largo. I’ve heard and played this work hundreds of times but I’m not sure I’ve ever heard the ‘alternate’ Introduction from Muzyka Gitarista but with the extra bass strings its possible here. There are also some parts later in the work that really benefit from the extra strings. Lovely sound from Smits and charming instrument!

She has this info on the instrument via her website.

Although the instrument was nearly falling to pieces (it seemed that it had been stored for a long time in a place with high humidity), all the parts were in an astonishingly good condition and showed no damage or even traces of having being used. So the only thing I had to do was to reassemble it!!

It is a typical guitar of the late 1820’s or the early 1830’s, with its classical shape and design, which we know from the guitar makers of Mirecourt or Paris.

Description: the table is of spruce back and sides of flamed maple ebony fingerboard and pin-bridge ebony veneered neck scale-length 63.5 16 frets. The addition of a seventh string was quite usual in the 1840’s and 1850’s, and recalls the music of Mertz and Coste.”

# Johann Kaspar Mertz# Raphaella Smits
Share this with a friend 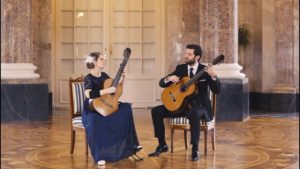 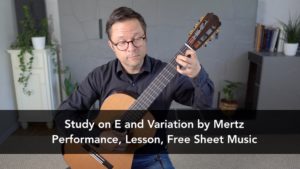 Study on E and Variation by Mertz 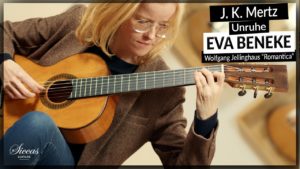 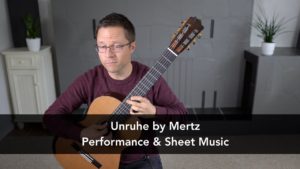