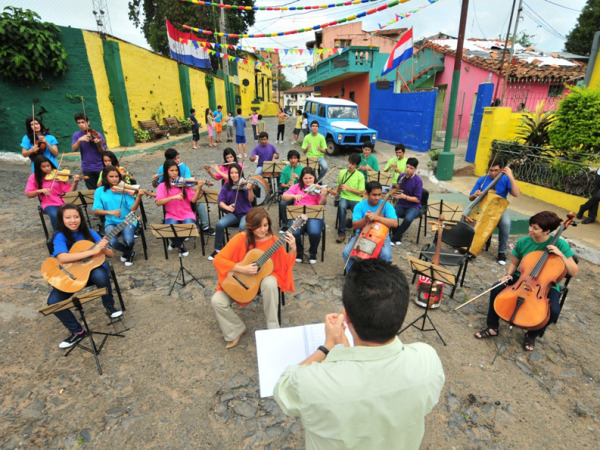 The one bad thing about this article was the line: “she is the only woman in the male-dominated field.” Sorry NBC, but there are tons of great women performers these days and of days past: Xuefei Yang, Gohar Vardanyan, Ana Vidovic, Susana Prieto, Dale Kavanagh, Sharon Isbin, to name only a few contemporaries, I could go on for some time naming artists. Not to mention the explosion of young and upcoming artists. Yes, males make up the majority but are certainly not dominating the scene. Still, Berta Rojas is a great guitarist so bravo to her on this project and her great recordings and concerts…

Multi-award winning Berta Rojas is not only one of the top classical guitarists in the world, she is the only woman in the male-dominated field.

Her new album “Salsa Roja” was released globally this week, paying tribute to her beloved Latin America. But what makes this collection of classical pieces extra special is the collaboration with the Recycled Instruments Orchestra of Cateura — or Landfill Harmonic Orchestra — a 19-member ensemble comprised of children from Asunción, Paraguay who perform using instruments they have built from garbage. Presently, Rojas is also working to design what she hopes will be the Cateura Music School, the town’s very first music school with real instruments.

“What happened to these kids was a miracle,” says Rojas, who is also originally from Asunción, but has been based in Washington, DC for the past 15 years. “This used to be a completely forgotten area in Paraguay — the parents of these kids are garbage collectors, and thanks to this program kids have a voice, and thanks to them the area will no longer be forgotten. We invited them to play on our CD is a symbol of our relationship of love and admiration.”

Not all musicians are natural performers (The Strad)