VI Variations sur les Folies d’Espagne, Op.45 (Six Variations on the theme of Folies d’Espagne) by Mauro Giuliani (1781-1829). This is a great work that I’ve used many times to transition intermediate students into the advanced level. It’s not Giuliani’s most ambitious set of variations by any means. As long as intermediate students have their technique of scales, arpeggios, barre, slurs, and stretch are under control it’s an accessible work. That said, in the hands of a professional it can be taken well into the advanced level with higher tempos.

The folies d’Espagne or folias is a famous theme mainly presented as a chord progression, probably of Iberian origin. From the Renaissance to today it has become a popular theme for variations. Baroque guitarists and lutenists used the theme regularly as did major composers such as Handel, Corelli, Vivaldi, and Boccherini. Guitarists, such Sor in his Op.15, love the theme for its simplicity and how it lends itself to a variety of textures from arpeggios to melodic embellishment. The theme is also known as La Folía, or Follies of Portugal, folies du Portugal or folies d’Espagne, La Follia, and Folias. You can read the wiki on folios here. Here’s my YouTube Lesson Link if you want to watch it there. 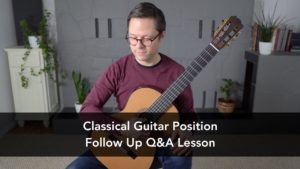