In the Woods by Toru Takemitsu (1930-1996). The three movements are: Wainscot Pond; Rosedale; and Muir Woods. The above video is Canadian guitarist Rob MacDonald via his excellent YouTube. This is one of the most important works for guitar of the 20th century. Takemitsu’s aesthetic and importance as a composer makes his works for guitar a real treasure for the repertoire.

I found this wonderfully worded write up by Graham Wade via this Naxos Album:

Toru Takemitsu, regarded by many in both the west and the east as the greatest Japanese composer of the twentieth century, was deeply influenced early in his career by the music of Debussy and Messiaen. The New Grove Dictionary of Music and Musicians described the characteristic elements of his mature musical language as ‘modal melodies emerging from a chromatic background, the suspension of regular metre, and an acute sensitivity to register and timbre’. We are fortunate that among his prolific output of orchestral, chamber music, film scores, and instrumental works, he also turned his attention to the intricacies of writing for the guitar, whether for solo or in an ensemble setting. The classical guitar was in many ways an ideal medium for Takemitsu, combining intense subtleties of sonority with a wide range of timbres and possibilities. Within a short time, after the writing of Folios in 1974, he was acknowledged as one of the twentieth century’s most formidable masters of writing for the guitar. He brought to the instrument a unique sensibility and an imaginative flair for its colours and expressiveness which has seldom been equalled. This recording is particularly relevant to understanding his art as it is played by Maestro Shin-ichi Fukuda, a close friend of the composer and one of Japan’s most eminent recitalists.

In the Woods (composed in hospital, November 1995, Takemitsu’s last composition before his death in February 1996), consists of three independent pieces for solo guitar, Wainscot Pond, after a painting of Cornelia Foss, dedicated to John Williams, Rosedale, dedicated to Kiyoshi Shomura, and Muir Woods, dedicated to Julian Bream. The première of Wainscot Pond, performed by Norio Sato, took place on the occasion of the funeral service for Toru Takemitsu in Tokyo on 29 February 1996. Julian Bream gave the first performance of Muir Woods in London on 4 October 1996. The work in its entirety, as well as the second piece, Rosedale, was first played by Kiyoshi Shomura in Tokyo on 15 October 1996.

As Takemitsu has commented, each title is taken from a place where there is a beautiful forest. Rosedale Woods are in Toronto, Canada, in a quiet residential area of the city where the trees are especially beautiful in the sunlight of early autumn. Muir Woods are in a suburb of San Francisco where giant sequoia trees ‘extend towards heaven in the deep forest’, which reminded the composer of the frailty of humanity in the face of nature. Takemitsu wrote Wainscot Pond after receiving a postcard from a friend showing a picturesque landscape, but confessed that he did not know where it was situated in the United States. In fact, Wainscot Pond is a lake in the Hamptons, Suffolk County, in the state of New York, some 160 kilometres from Manhattan.

Julian Bream has described Muir Woods in terms that could well apply to all three pieces: ‘The music has an undeniable valedictory quality. It is highly distilled and the texture characteristically refined. It is also music of extraordinary stillness, music that dissolves gently into silence. ’

# Repertoire Spotlights# Toru Takemitsu
Share this with a friend 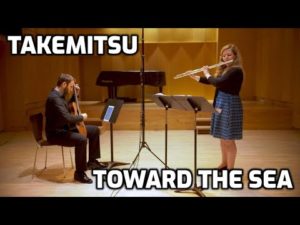