Adam Cicchillitti (Guitar) and Lara Deutsch (flute) perform Toward the Sea by Japanese composer Tōru Takemitsu (1930-1996). The work is divided into three sections: The Night, Moby-Dick, and Cape Cod. This comes via Cicchillitti’s YouTube channel. I always enjoy Takemitsu, happy to see this nice performance by Cicchillitti and Deutsch. Takemitsu’s interest with the subject of water was an ongoing theme in his works, dating back to his 1963 electronic work, Water Music. Takemitsu composed three versions of Toward the Sea, the first for flute and guitar, then harp and string orchestra, and then flute and harp. Here’s the YouTube writeup by Cicchillitti:

Toward the Sea is a three-movement work by Toru Takemitsu, written for the Greenpeace “Save the Whales” campaign in the 1980s. The word S E A is spelt out throughout the course of the work using the motive (Eb E A). Takemitsu is known for evoking nature through his use of musical silence and rest – all three movements feature this dialogue of sound and silence, where gestures culminate in periods of complete rest. Takemitsu also chose the guitar and flute likely as an evocation of the native shakuhachi and biwa instruments, which are of traditional Japanese origin. The use of folk instrumentation, evocation of nature, and Debussy-esque harmonies are typical of Takemitsu’s writing style in the later part of his life. 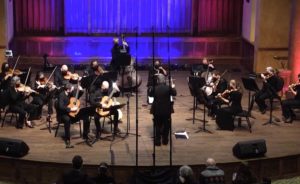