Dmitriy Murin (Russia) plays the fantasia Pensée fugitive by Johann Kaspar Mertz (1806–1856). Wow, what a spectacular display of extroverted virtuosity. At first I thought he would not be able to sustain this level of punchy fast playing but he nails it and blazes through the fast passages. Later on he shows his sweeter side with some very gentle nice phasing. This guy is amazing. Here’s a small bio of Murin.

This comes via Guitar Magazine on Youtube via Moscow. Performed live on November 11th, 2018 on ‘Two evenings in November’ Festival. Gnessins’ Academy of Music, Moscow, Russia. As they say on their YouTube: “The great fantasias La rimembranza, Pensée fugitive and Harmonie du soir, considered a trilogy, are probably Mertz’s most important contribution to the guitar repertoire, his most technically demanding pieces, clearly inspired by Liszt’s piano music.” 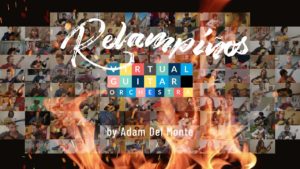