Elevated Fingerboard (or raised fingerboard) is actually a bit of misleading name as it’s the top of the guitar that slopes down. Nevertheless, I will never go back to playing guitars without a raised (elevated) fingerboard. They are simply easier to play and allow great reach and playability in the upper positions. In a way, the snobby and negative response of players toward cutaway guitars really makes no sense at all. In a cutaway, the luthier has designed an instrument for the player! However, despite the fact that I realize this I can’t seem to bring myself to buy a cutaway (not that many high-end classical luthiers build them…although that is changing). So, the raised fingerboard gives the player some extra reach and a traditional looking instrument which seems like a good compromise.

Also worthy of considering is the change in design and sound of any alteration be it elevated fingerboards or cutaways (for better or worse).

I talk a bit about the raised fingerboard in this video demo of a Douglass Scott guitar.

Over 90% of my clients order this feature with thier guitar. The top of the fingerboard is a full 20mm above the soundboard at the 12th fret, giving the player much better access to the upper register. On my guitars the neck is one continuous piece right to the soundhole – no butt jointed wedge from the 12th fret to the soundhole like you might see on other guitars.

Also, because of the extra mass under the fingerboard in this area, the notes tend to have better sustain than with a traditional non-elevated fingerboard.

An elevated fingerboard is a standard feature on all my instruments. The primary advantage is improved left hand playability on the upper frets, although the increased distance between the strings and the top is also advantageous for the right hand.

At the neck/body joint the distance from the surface of the fingerboard to the top is 14 millimeters, a comparatively moderate distance, but one that players tell me is adequate and very comfortable. I have created the elevation of the fingerboard by giving the neck a negative angle in relation to the guitar body, rather than by changing the configuration of the upper bout, as a few other builders (Tom Humphrey on his Millenium guitars and Greg Byers, for example) have done. The elevated fingerboard on my instruments is visually unobtrusive, and the guitar retains its traditional appearance.

There is an excellent thread on Delcamp HERE with input from Thomson, Dominelli, Carruth, etc…

There is a great deal of discussion on how the design alters the sound. From my own experience I’m not sure the difference in sound is very noticeable. It is probably there but very subtle. However, the difference in playability is huge. As I said before, I will never buy another guitar without a raised fingerboard. I also don’t know of anyone else who has “gone raised” and is willing to go back. 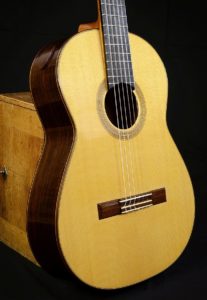 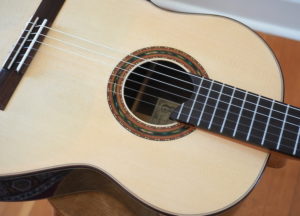 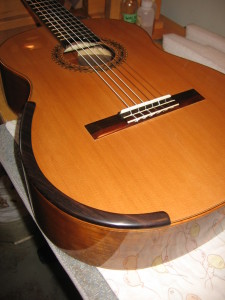 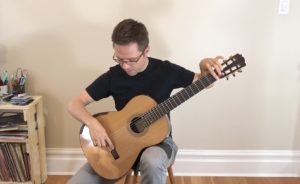